Despite the weekly ritual of hauling our blue bins to the curb, as a whole, we suck at recycling. Phoenix and its suburbs like Glendale have some of the worst numbers in the country when it comes to recycling.

The worst part...even LA is better than us. Shame.

As a hauling and junk removal company in Glendale we offer to recycle items that we pickup; but even then, many people could care less (especially if it costs any extra to haul their recyclables to the plant instead of hauling everything to landfill).

We Need To Step It Up

You may be wondering how could those LA-oians beat us in anything, I mean, its LA, ugh. Well for starters a lot of people here just don't get it. They put things in their blue bin that belongs in the black, and vice versa, we'll never win the recycle game when some of our teammates don't even know the rules of the game.

Glendale, AZ Is Leading The Way, And Not In A Good Way

Another reason we keep losing might be because we have too much landfill space. Therefore, we think we can wait to pass off this problem to someone else. 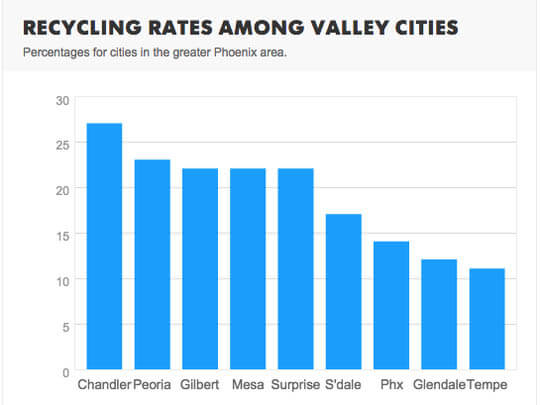 Glendale is just as bad off as the rest of the state posting some of the lowest numbers in the country.

What Is Being Done At Local Recycling Facilities, Presently? 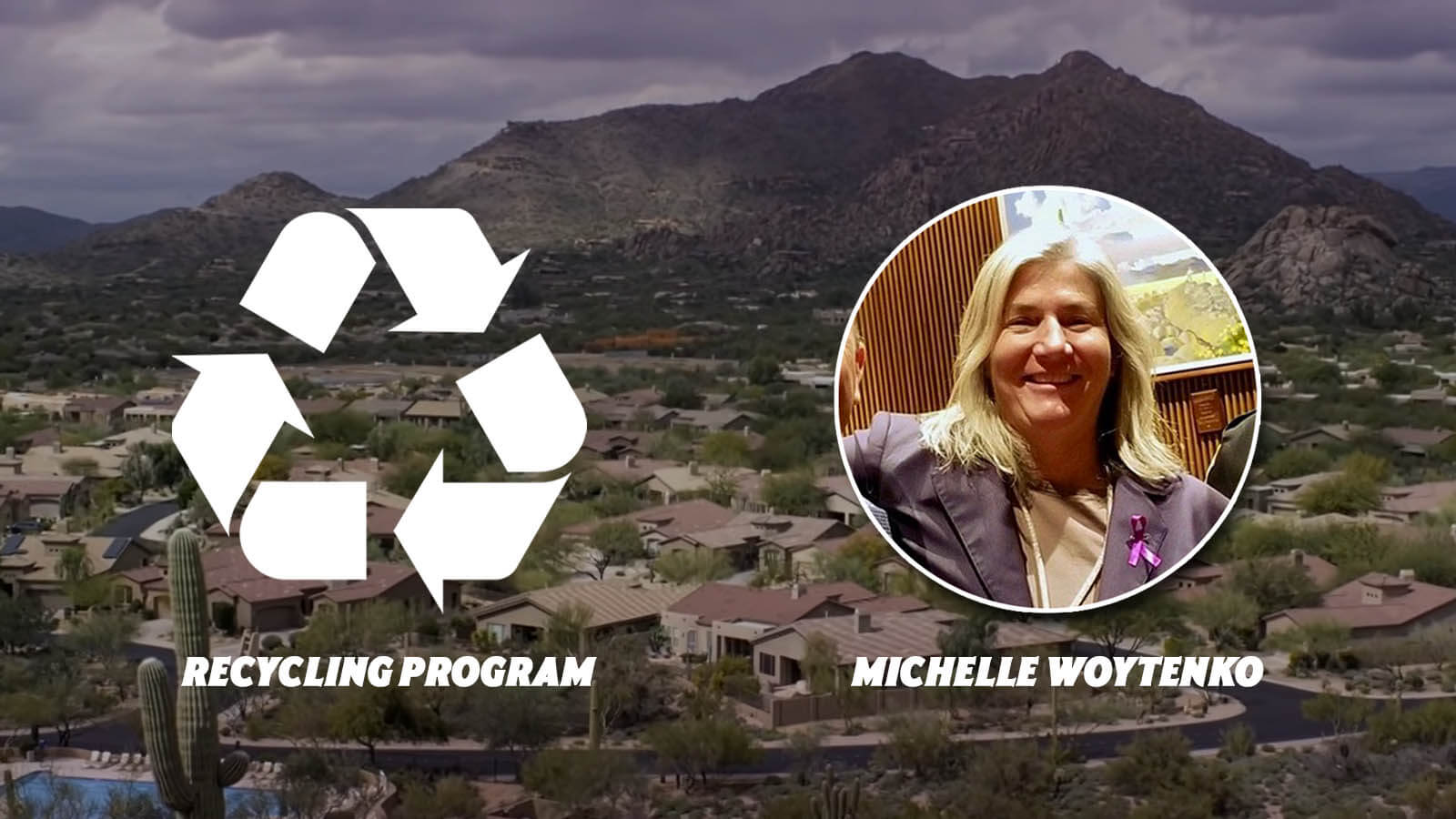 Since the early 2000s, the recycling program in Glendale was a booming business with most of the items readily sold to China. This dramatically changed when Chinese recycling experts realized they had a golden opportunity to produce new paper without needing to recycle old paper. For them, they found the cost of making new paper was actually cheaper, so they refused to buy old paper that was being sold from the US.

On top of this, they also have very strict control on what kind of plastics can be exported and what they will accept at their recycling facilities. This is what caused much of the decline in recycling operations for Glendale and many other communities all throughout Maricopa County. So far, Glendale's recycling facility currently is facing more cutbacks with sorting due to what is arriving within the Blue Bins' meant for recycling.

As stated recently, the Director of Field Operations: Michelle Woytenko stated that their recycling program has become less profitable than when it started in 2001. The number of hours that are devoted to sorting is costing the facility more money than they can earn. This is now leading to a new concept of reaching for public opinion through social media to get feedback. This also ultimately comes down to what can be recycled effectively.

What Is Glendale Recycling Now?

Currently, the Glendale recycling facility can take in newspaper, cardboard, carton, chipboard, but is not limited to tin cans, steel, and certain types of plastic. Sadly, the only plastic they can do anything with has a label that includes a 1 or 2 located within the triangle symbol. They had to stop accepting anything that has anything which includes 3 through 7, which is unable to be recycled.

They also have limitations on items that most people think can be recycled and include plastic grocery bags, Styrofoam, and landscaping plastics. One item that they don't like to mention includes glass. The reason for this is that their current equipment can crush glass into fine sand but will ruin the machinery very quickly due to the wear and tear that glass takes on these crushing machines.

They are currently looking at cost-effective solutions for new glass crushing equipment that could be a solution for Glendale. Other cities that use this method are showing the profitability of selling recycled glass sand. Yet with all of these possibilities, there are further restrictions that must be followed if this recycling program can survive.

What Glendale Recycling Can Accept Now? 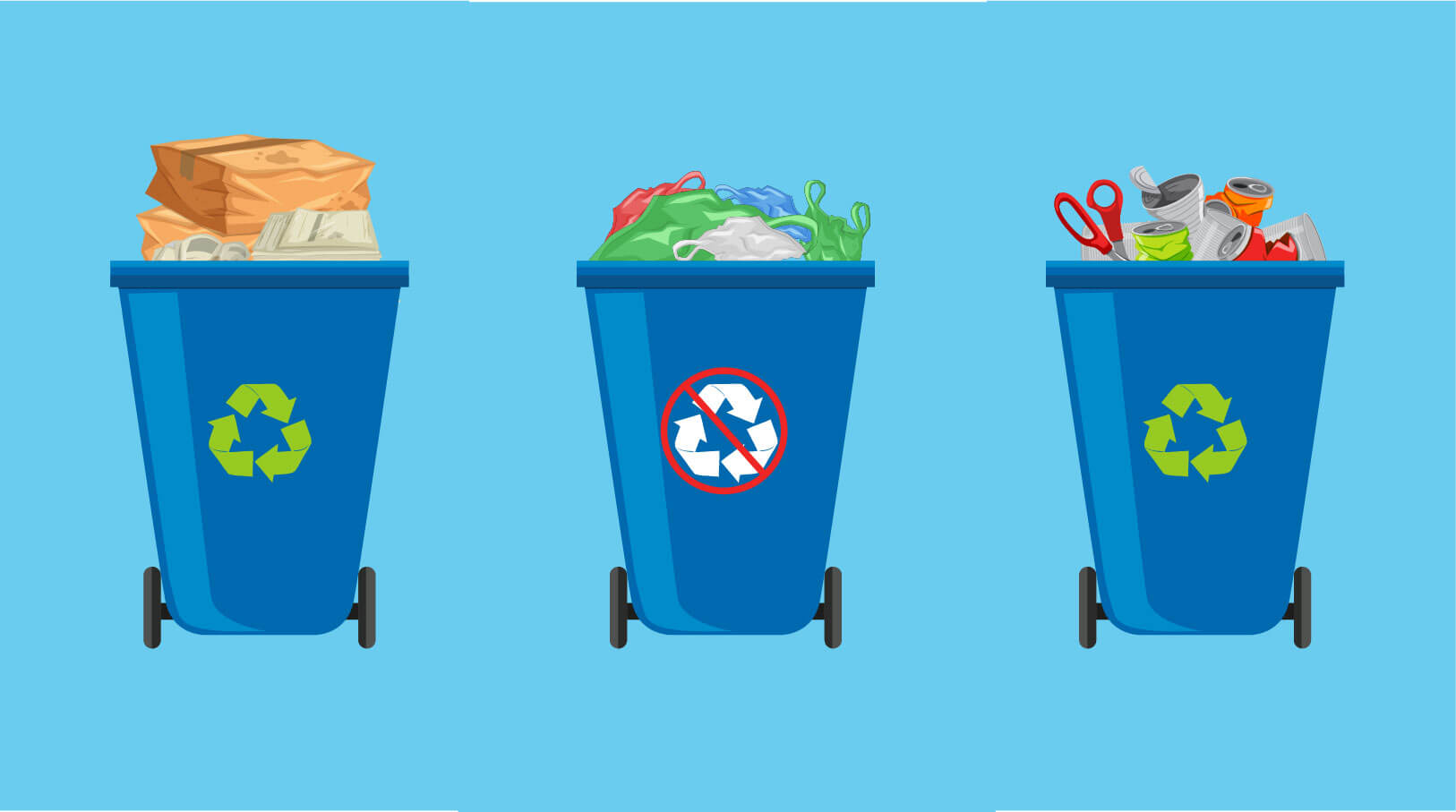 Aluminum cans and aluminum foil are always a good idea along with soup and vegetable cans and anything made from tin or metal meant for food packaging. All types of paper and cardboard come from boxes or food packages. If you have containers, they should be somewhat clean and not have residual contents leftover inside. Just rinse them out to remove anything leftover.

Be sure to check for the 1 or 2 that's inside the triangle since all other numbers won't be accepted any longer. Plastic bags are bad for the recycling equipment so these must be sent to the trash. Inserts and bubble wrap must be taken out of boxes so only the cardboard is left. Please remove plastic labels that are stuck to the outside that are used to attach invoices or shipping info.

Other Services You Need To Know

The Glendale city services do take in items that aren't so easy to throw out in the trash and need to be taken care of differently than what you put in the trash or recycling bin. These can include bulk trash such as couches and old furniture. Collection dates and times will be specific to district sections within Glendale where you live. If you have items such as broken glass, newspaper, or other recyclables, these need to be put into separate boxes to identify these items easier. 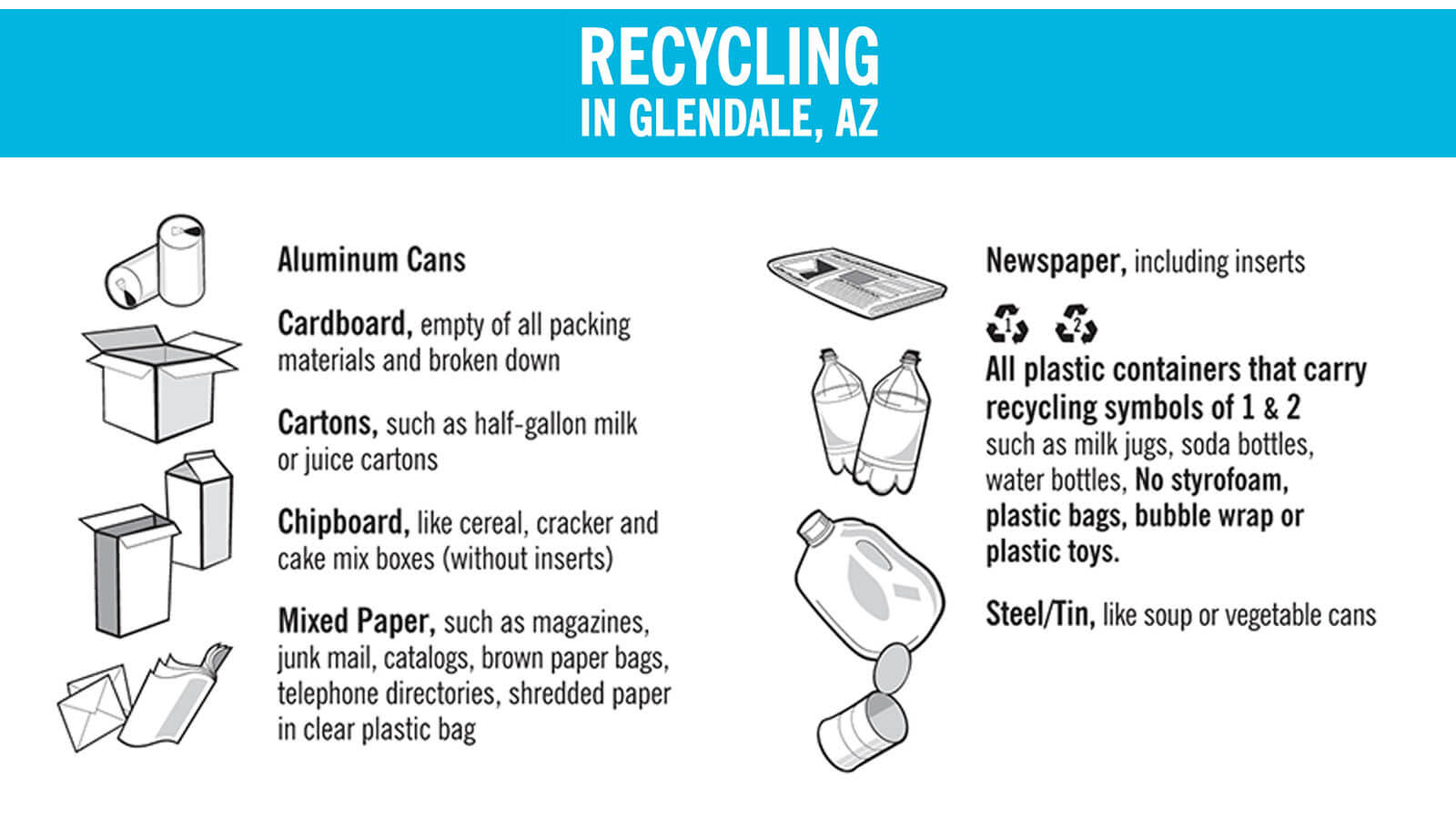 It's important to mention that items that fall under hazardous waste have a separate collection date than bulk trash days. These times are in the spring and fall and will include approved items that are accepted. Be sure only to include what are accepted items by checking this page for what is allowed and what is not.

Recycling Habits In Glendale Are Costing Us All 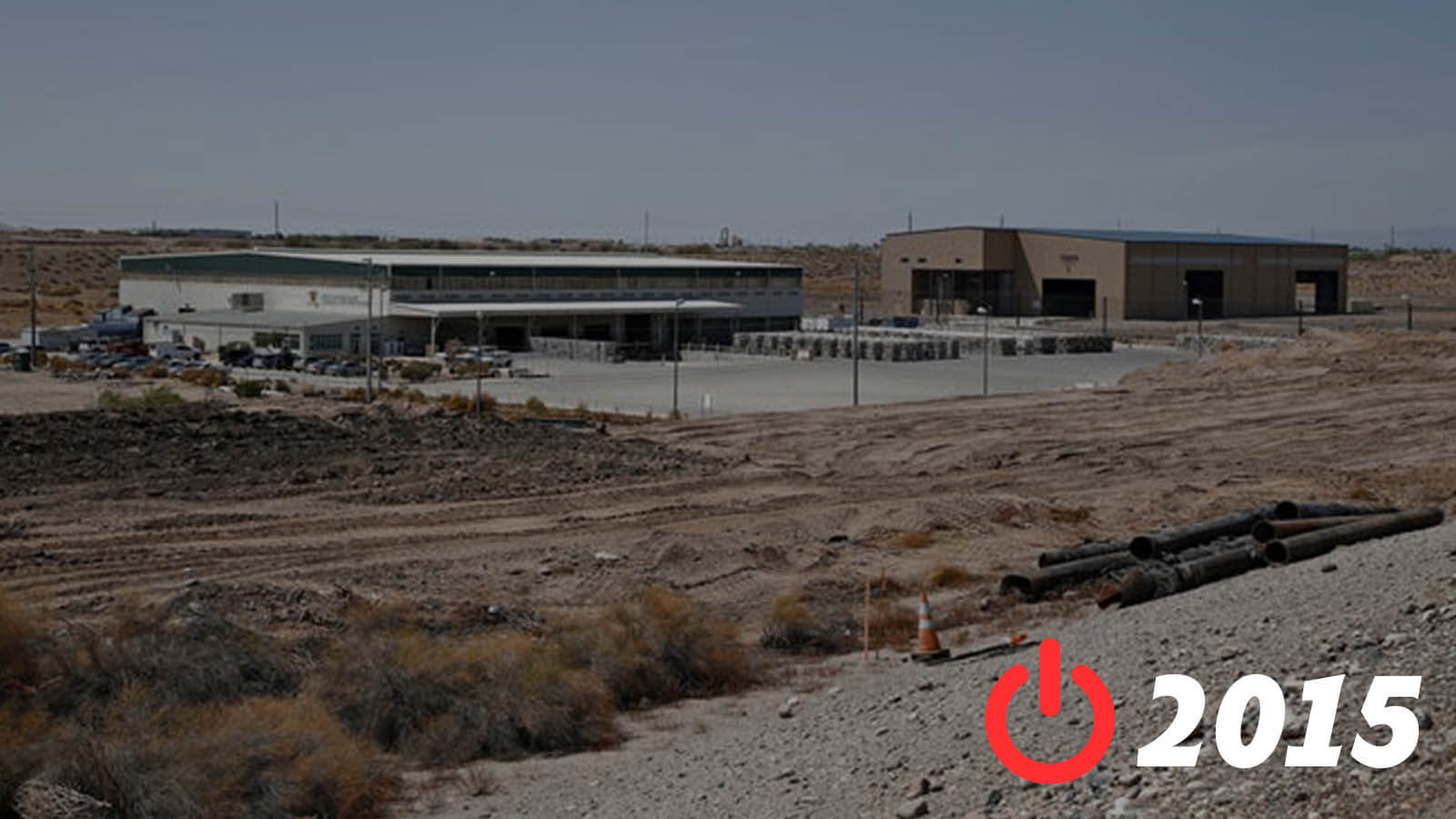 Only five years later, Glendale's dream of being the first in the nation to convert garbage into energy have come crashing down.

You might recall there was a bit of a snafu court case that was an aching reminder of the mess that Glendale had suffered in the past with recycling programs. Back in 2015, a new venture with the city of Glendale and Vieste Energy was to convert the trash into a reliable energy source by turning the city's trash into energy. The main problem occurred when Vieste had already set up their operation at the local landfill at 115th Ave and Glendale Avenue.

See in 2012 Vieste Energy and the City of Glendale signed a contract that would allow the City to deliver 120,00 tons of trash per year to Vieste Energy who would then transform it into electricity through a process called gasification.

But these two just couldn't get along. A program that should have benefited the City and residents of Glendale took an ugly turn when the two could not agree on the issue of yard waste.

The disagreement came to a head when Vieste filed a lawsuit against the City and receive a countersuit from the same.

Instead of finding a solution to help minimize the amount of waste in Glendale they fought like two petulant children and wasted a lot of time and money.

According to Vieste, yard waste was supposed to be presorted by the City because they lack the ability to sort it at their facility, the City refused. This disagreement led to over 300 trucks being turned away because they were caring yard waste.

The recycling facility has been shut down since May of 2015. Instead of creating renewable energy we will continue to flood our landfills. 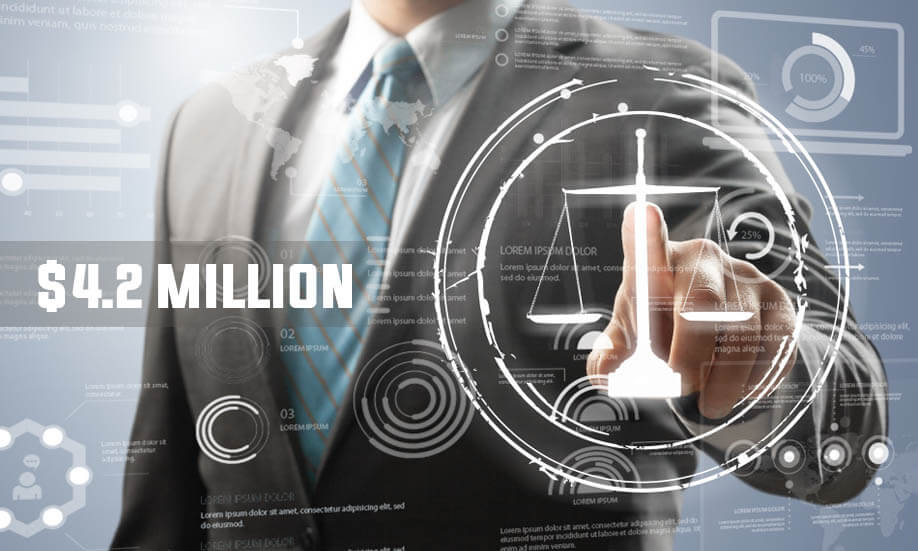 Instead of beginning their work, Vieste slapped a $200 million claim against the city all because there were grass clippings mixed into the regular trash. The city reacted swiftly and according to Nancy Mangone, Glendale acted swiftly to protect their interests and pushed a litigation suit to protect Glendale citizen's tax dollars. It took an additional 2 years until the Maricopa Superior Court ruled in favor of Glendale's countersuit.

The result was more than clear when the original contract from 2012 that was signed with Vieste Energy and the city of Glendale specified that it did not require Glendale to alter any of the waste delivered to Vieste Energy facility. Not only did this debunk Vieste's original claim, but further found them at fault because they failed to 'come into commercial operation' as specified by their contract.

Since the ruling, Vieste Energy had removed their facility from the landfill long before the 2015 ruling was even announced. Their company lawyer further proclaimed that they will appeal, but nothing has since appeared thus far... The good news is that the city of Glendale was awarded $280,000 in damages, $2.9 million in attorney fees, and nearly $1 million in various costs associated with their case. They are far from financial recovery.

But the real question is that Glendale city officials still have no plans unveiled so far on how to convert their trash into energy. This brings us to new developments that can be mentioned as of this writing.