A City of the Future

It's hard to believe that just 3 decades ago, Mike Ingram had purchased quite a large piece of land that was purchased from the legendary actor John Wayne. While this is only part of the story, many components are developing a new concept that ties in with a highway extension, a city of the future, and a revitalization of Buckeye that is bold and daring.

Starting with the Trillium project at Douglas Ranch, this is part of a proposed and ongoing project that spans 34,000 acres which will start selling lots this year. This is part of a project that includes the Howard Hughes Corporation which has invested $600 million with additional investors within the area. The first phase of this project is slated for developing Trillium that intends to create housing for at least 300,000 residents. 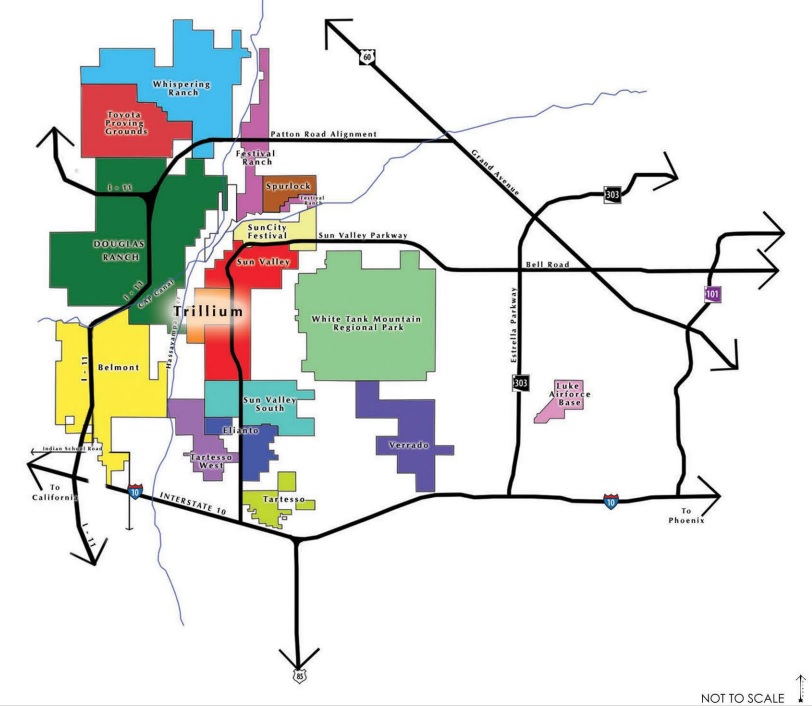 It's part of a community project that will provide a business park, residential family homes, and an executive residential zone. It will also become a direct access destination that would connect Interstate 11 that passes through Trillium. This new Interstate connection would further allow new residents to have direct routes from Phoenix to Las Vegas. And what might sound like the mythical golden story of El Dorado, there's more to this story to uncover.

A Superhighway of Abundant Trade

A long time in the making, this corridor route that is aptly named Interstate 11 was originally unveiled in 2014, not too far from the Hoover Dam has finally gotten the green light from the US Department of Transportation in 2021. This newly proposed route corridor will become a connection route that will enable many who live in Buckeye currently to have direct route access to Phoenix, Las Vegas, and all the way down to Nogales at the Mexican border.

It's obviously a major project that will enable many of the new developments and projects in Douglas Ranch to move forward with ease. This proposed span of Freeway is over 280 miles connecting major interstate links along the path from the border all the way to Las Vegas. It's one of the few new Infrastructure and Jobs Pact projects that were outlined in Joe Biden's 1 billion dollar initiative that actually goes to improving and developing new roads in America.

What this new project will do is to create a high-priority route in the National Highway system. Although the initiative doesn't mention any reference to Interstate 11 specifically, the proposed plans for I-11 have already undergone countless studies and environmental impact reviews. Among the plans that are being addressed is the impact of the desert tortoise and several species of plants.

The environmental impact has also gotten swift attention from environmental advocates who are against the extension for obvious reasons. On top of that, local Native American Indian tribes have further voiced their opinions on how I-11 will impact their religious ceremonial sites.

An Ever-growing and Emerging Population

As proposed by the developers for Trillium, there would be an estimated jump in the population in Buckeye that could expand to 300,000 new residents. The current population numbers around 89,000, yet with new construction and Freeway development on the horizon, this number could jump to over 305,400 as early as 2040. Just the proposed I-11 project will be pumping an additional $30-60 billion into the local Buckeye economy!

This would mean that a sustained temporary population will be appearing sooner than expected. There are over two dozen projects meant for housing in Buckeye alone, that are all expecting new workers, contractors, and residents in the 2022-2023 season. Aside from the new phase of Trillium to soon get underway, the advancement spurned by the I-11 Freeway project was a catalyst for community growth.

There is also a growing population that is quickly moving to areas including Phoenix for work opportunities and will likely want to find better and more affordable residential housing. This is where the developers of Trillium are ultimately looking to strike gold with an influx of new residents that would likely commute to Phoenix for work. The border of Buckeye would then extend from Wickenburg all the way down to Gila Bend in the south as early as 2040.

A major concern to the Buckeye and the Douglas Ranch project is the scarcity of water. For a project of this size, water is an asset that could potentially shut down the entire project aside from the lower Hassayampa aquifer as their proposed source of groundwater. The most current news about this prospect is another question that has received more environmental backlash that questions this move.

According to David O'Reilly, of the Howard Hughes Corporation, there is an abundant source of water to sustain the next 100 years located directly underneath Douglas Ranch in Buckeye. However, there is one snag to this proposal that is alarming members of the Sierra Club Grand Canyon Chapter. According to Sandy Bahr, she claims that pumping groundwater would impact the region greatly causing fissures and land subsidence that cannot be fixed once any water is pumped out.

Other sources have quickly pointed out that the level of water in this underground basin that was estimated to exist is much less than it appears to be. There are also fears that the water may not be usable due to the quality levels. Despite this, O'Reilly has shown they are compliant with regulations according to the ADWR (Arizona Department of Water Resources).

Currently, the ADWR is conducting further tests to update their model of the groundwater basin to provide accurate results for the estimated 7,021 lots that will require water just for the trillium project.

Among some of the more pressing issues that are sounding alarms for the developers of Douglas Ranch is the issue of environmental impact. These are largely coming from the Sierra Club's Grand Canyon chapter head Sandy Bahr who is sounding off about the potentials of animal wildlife and vegetation. It seems that the larger issue with global footprints may spoil hundreds of miles of untouched desert and life that exist there.

One such concern is for the desert tortoise that has been spotted within a section of Buckeye close to the Douglas Ranch border. Only one tortoise was actually found living there, but that's enough to raise concerns in addition to many types of wild animals that roam within this arid territory. In addition to that, fears of the current climate crisis are being used as a ploy to prevent development for the ongoing Freeway and Trillium projects.

There is also another potential problem with the local Pascua Yaqui Tribe located in Pima County. They are deeply concerned that the corridor Freeway project will threaten homes and ceremonial sites used for religious pursuits of its tribal members. And though the tribe has requested sitting down and having a powwow with government and tribal leaders, they are not entirely against the project as a whole, but they do have concerns about the final proposed route.

What is happening currently?

Since last December in 2021, there hasn't been much news that is being revealed just yet. The latest news is- that lots will be available for sale in 2022. Nothing formal has been announced on the main website nor is there much news on the proposed Interstate 11 plans moving forward. Not to say that Rome wasn't built in a day, this project has been a growing concept that has been around since the early 2000s. However, unlike the expectations for the development of Tartesso, another development near Trillium, Trillium is showing much more promise to reach its initial proposed expectations.

If any when there is breaking news that emerges, we'll be following this development closely to give updates on construction or groundbreaking ceremonies are being announced. As many large-scale megaprojects such as Trillium at Douglas Ranch aren't solely dependent on the outcome of the I-11 freeway project, it could be a critical linchpin to slowing the project even further if the freeway corridor is delayed for another 10 years.

Or perhaps, the allocated funds that are intended from the Infrastructure and Jobs Pact approved last year are not available yet (as of this writing). So, what is very apparent is the buildup of advertisements that may lead to more interest in the Trillium sales pitch. Expansion in new jobs and construction could indeed rival the population of Phoenix- if it occurs without further delays.

Then again consider the Nikola Hydrogen Truck factory that was proposed in January of 2018 that was to be located in Buckeye near the Douglas Ranch location. This was 4 years ago and mentioned the Trillium project back at that time. Or consider that a new shopping center will be built at the corner of Jackrabbit Trail and Indian School Road in Buckeye that was announced in January of 2021?

There isn't a lot of information that is showing much of anything is being built in Buckeye aside from these random news announcements. Nonetheless, we are thankful that we can share our views on this and hopefully recycle some of that information that comes from it.

As always, Arizona Junk Removal, will be standing by to service this new addition to Buckeye.