Phoenix is the United States’ sixth largest city. While being a big city, and tourist favorite is often a benefit, residents strive to have a clean city to enjoy year round.

Whether you’re residential or commercial in Phoenix we are here to help! Removing appliances, carpeting, storm debris, and more can be a huge hassle. We are committed to making the process of cleaning up unwanted items as easy and stress-free as possible!

Getting a quote and booking service has never been easier...

Dumpster rentals made affordable with up-front pricing that includes drop-off, pick-up, and a daily or weekly rental fee. We offer various bin sizes perfect for residential, retail, or commercial clean-ups. Click to get more information on our bin rentals and schedule a drop-off today. 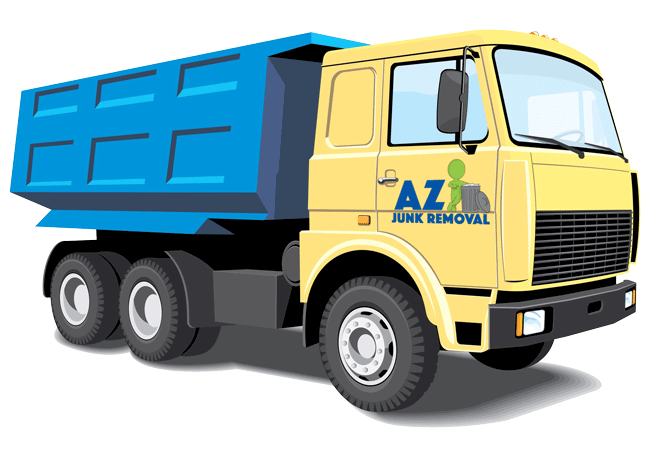 Arizona Junk Removal is 100% committed to going the extra mile to ensure your junk is taken safely from Phoenix and disposed of properly or better yet donated if possible! Our goals are to get your trash or junk out of your home or business with little to no hassle on your part. Contact us today for trash and junk removal anywhere in the valley.

Efficient. In and out. Priced fine

On time. Polite. Efficient. In and out. Priced fine. Swiped my card and emailed me an invoice. Says it all.... see more on Yelp!

They were quick to clean out the shed

They were on time, courteous and the price was actually less than I had expected. They were quick to clean out the shed and found some pictures still.... see more on Yelp!

Very professional, efficient and cleaned up after removing items from the patio.... see more on Yelp!

Courteous, professional, and on time

I was able to email them a picture of what I wanted hauled away and get a quote. They came the next day, were courteous, professional, and on time. They even fit some more stuff into the truck at no extra charge... see more on Yelp!

quick to respond and seemed professional

The good news is that they are quick to respond and seemed professional. The amount quoted on the phone and based on their website suggested it would be good.... see more on Yelp!

In about half an hour the crew of two finished what would have taken me days to accomplish by myself. Their well-designed website also made.... see more on Yelp!

Excellent work, dependable and professional. I would highly recommend if you have a junk removal need.... see more on Yelp!

helpful and they showed up as promised

I booked my appointment online and Brad contacted me right away to schedule a pickup. He was super helpful and they showed up as promised.... see more on Yelp!

Brad and Tyler were awesome, fast, efficient, and very polite. The price was unbelievably inexpensive. I would use them again in heartbeat and recommend them to anyone.... see more on Yelp!

Friendly & fast, definitely the guys to call. They got our old couch out easier & more quickly than the furniture devilry guys... see more on Yelp!

The crew of two arrived exactly when they said they would, provided an immediate estimate that was within my budget, and then got to work. It was quite a bit of construction.... see more on AZ Junk

I definitely recommend their services

They were quick, efficient and had reasonable rates. I definitely recommend their services and will be using.... see more on Facebook

I called on a Thursday, and Brad and his team were able to come the following day to remove about 1/2 of a truck load of various materials from my yard.... see more on AZ Junk

If you have junk that needs hauling away in a quick, efficient manner, do not hesitate to call Arizona Junk Removal. After cleaning.... see more on Yelp!

Brad provided a reasonable estimate and stuck to it. He arrived when he said he would, both for the estimate and the haul-away. Removed two large piles.... see more on AZ Junk

They get the job done! They're super reasonable and will beat competitors prices!... see more on Facebook

cleaned up my rental property disaster

Referred to me from Garbage Guys for the Westside. Showed up on time, and cleaned up my rental property disaster. Also took the time... see more on Yelp!

So helpful and fast and made

Use them! So accommodating, prices are listed online and pretty accurate. So helpful and fast and made our move out of state easier! When he pulled up in our driveway.... see more on Yelp!

The price was unbelievably inexpensive

Brad and Tyler were awesome, fast, efficient, and very polite. The price was unbelievably inexpensive. I would use them again in heartbeat and recommend them to anyone.... see more on Facebook

I had an emergancy need

I had an emergancy need of junk removal, I tried calling several companies. The only company that actually picked up and answered was Arizona Junk Removal!.... see more on Facebook

I continue to enthusiastically recommend Brad and AZ Junk Removal. This time I had ordered a king size mattress online and needed the old one removed.... see more on Yelp!

This company is great!! Three pleasant and professional gentlemen arrived at our door less than an hour after we called. They efficiently removed our furniture.... see more on Yelp!

excellent job and really are a life saver.

Called to having tree trimmings removed from my backyard and were here within 2 hours. Very helpful and pleasant.... see more on Yelp!

I called them and explained what I needed them to do. He explained how the pricing system worked. Since it sounded reasonable to me and he was able to come out the same.... see more on AZ Junk

Everything went as smoothly as possible. Scheduling was easy, Brad was responsive. They were on-time, efficient, and professional... see more on Yelp!

Jim B. Phoenix, AZ As reported on Yelp!

Kathryn B. Phoenix, AZ As reported on Yelp!

Phoenix is the anchor of the Phoenix metropolitan area, also known as the Valley of the Sun, which in turn is a part of the Salt River Valley. The city is the 13th largest metro area by population in the United States, with approximately 4.3 million people in 2010.

Scheduling a bulk pickup has never been easier...

Get a bid and schedule service.