How to remove a hot tub from your backyard

Removing a hot tub can be a huge endeavor. As we’ve already discussed getting rid of an old spa is tricky. You can try to recycle sell or trade it in, but sometimes these options just don’t work out. Suppose, like most spa owners, your spa is simply dead in the water. It's old, it's broken, and it's not worth the cost of repairs. 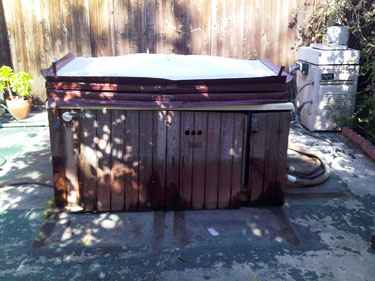 Sometimes the only option to remove that spa is to demo it.

If you're feeling industrious there is one more way to get rid of the old tub and maybe have a little fun at the same time.

If you have the tools and the know how you can dispose of the spa yourself. Simply put, get out your saw and chop it up into little bitty piece, all the while reliving your childhood games of Godzilla and relishing in the destruction.  If it's clear the tub will never see life again, removing it in parts is much simpler than trying to remove it as one whole piece.

Now, don’t just jump in guns blazing, we know Godzilla never thought about safety, but you're not a mythical creature. You're a human and much more fragile than a 55,000-ton mutant whale gorilla.

Demolishing the hot tub to remove it

First, you must think about the electricity running to and through the tub. Most hot tubs have high voltage connections, and these connections must be addressed before you can do anything else. Look for a main electrical disconnect near the tub, if the tub is wired in you will need to shut off the breaker. Check, double check and triple check all electrical connections before you cut into anything. If you don’t know for sure, make sure, hire an electrician if you need to, don’t be dumb.

Check, double check and triple check all electrical connections before you cut into anything.

Attach a garden hose to the hot tub’s bottom drain spout. You’ll need to twist the hose onto the spigot so make sure it’s on firmly.

Once you are positive there is no electricity running through the tub you can get to work. The next thing to do is to drain the tub. Hopefully, you can use a hose and drain it into your yard. If you're unlucky, you can use a large pail and drain it by hand. Make sure you drain it all, assuming you are using an electric saw, you don’t want any water to leak out and connect to your live saw...get what we’re saying?

Next, start removing any wood paneling. You’ll want a drill to help remove the screws. When the wood is separated from the tub you can easily recycle it.

This reminds me of a time when we found a skunk as we were removing paneling to haul away a spa.

If there are any parts of your hot tub that are connected via screw or nail, you can remove these manually through the use of a screwdriver or hammer. 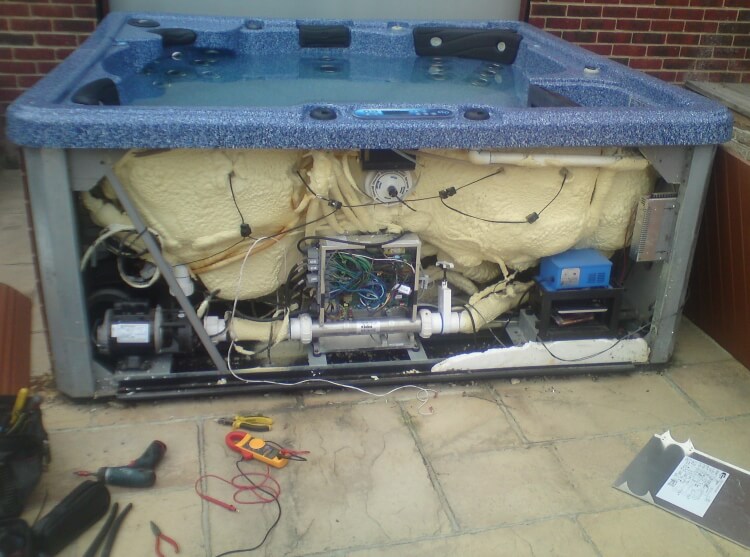 Once the paneling is out of the way, remove as much of the mechanical equipment as you can. There is a bunch of crap in there, motors, heaters, pumps, just tackle it as best you can and set those pieces aside. You might be able to recycle some of these parts too.

The biggest part of the job is the fiberglass tub, but it is also the most fun. Use a reciprocating saw or even a chainsaw, chop it all up into small manageable pieces. Remember, though, this is fiberglass and the sawdust it will produce is full of crap with sharp edges. You should wear long sleeves, safety glass and anything else you need to protect yourself.

Once you have every cut up into small pieces you can haul it out and dispose of it. 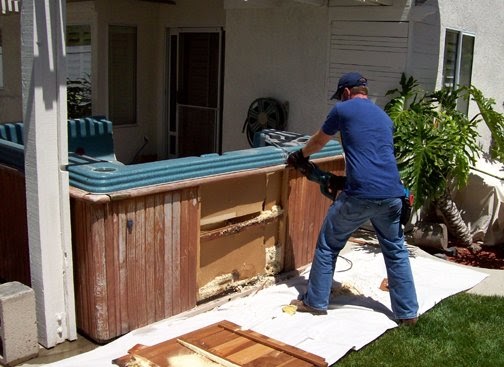 AZ Junk Removal is located in Phoenix and has removed 100s of spas. Call us today if you need some assistance removing your hot tub, spa or jacuzzi. If you don't live in within the Phoenix metro area, simply search for "hot tub removal near me" and you'll find a junk removal company near you willing to help get that old spa out of your backyard.

Decluttering After Emerging from Quarantine

Time to Cut Back, Minimize & Renew Your Home

Hot Tub Disposal – How to Get Rid of That Old Spa